I am very honored and grateful to the Philadelphia Sketch Club and the judges for Phillustration 7, for awarding my illustration “Ghost Tour” First Place in the Book Illustration category this year. I painted this piece last fall for the children’s book Let’s Visit New Hope, written by Gayle Goodman and Roy Ziegler and sponsored by the New Hope Historical Society. 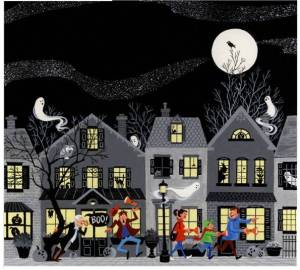 There were no shortage of terrific illustrations in this year’s show in several different categories. Other members of the Bucks County Illustrators Society, of which I’m a co-founder, also had outstanding work exhibited, including Glenn Zimmer, Deb Hoeffner, Pam Hamilton, and Rebecca Rhodin. Joe DeVito served as one of this year’s judges and his pencil concept sketches for a King Kong project he is working on were also prominently featured.

The crowd at the Sketch Club was large and enthusiastic for the opening reception yesterday – Pam Hamilton took this wonderful panoramic shot of the gallery:

The Sketch Club is a venerable Philadelphia institution, having started in the 1860s, and is considered the oldest continuously running organization for artists in the country. Outstanding painters and illustrators of the past who have been members include Thomas Eakins, N.C. Wyeth, Henry Pitz, Walter Baum, Edward Redfield, Daniel Garber; and Ranulph Bye, among many others. 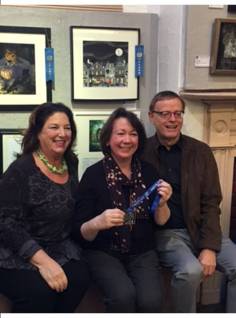 Sketch Club President Rich Harrington and the staff created a varied and exciting exhibit that I recommend to everyone who enjoys ‘fine art that tells a story’ – which is how good illustration is defined. I am thrilled and grateful to receive this recognition, and thankful also to authors Gayle and Roy for writing the book that inspired my illustration!

The Sketch Club is located at 235 S. Camac Street in Philadelphia, and this show is up until November 27, with gallery hours Wednesday, Friday,  Saturday and Sunday from 1:00 pm to 5:00 pm. 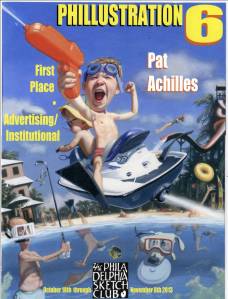 I’m thrilled and honored to have received the First Place Award in Advertising art from the Phillustration 6 exhibit, hosted every year by the Philadelphia Sketch Club. The poster at left is the award certificate, with artwork by the inimitable James Bennett, whose painting of Roger Waters won Best of Show.

My illustration for the play ‘The Secret Garden,’ which won First Place in Advertising Illustration

Also on display in the exhibit is artwork by BCIS members Glenn Zimmer of North Wales, Monika Hinterwaldner and Lee Harper of Doylestown, Pam Hamilton of New Britain, Rebecca Rhodin of Lansdale and Joe Kulka of Quakertown. It’s a terrific show, featuring art by many area illustrators including Charles Santore, Bob Byrd, John O’Brien and David Brinley (who juried the show) and it runs through November 8. The Chairman of the Phillustration show is illustrator Rich Harrington, and he’s done another fantastic job.

I recommend checking out this amazing show in person, but if you can’t get to Philadelphia there is also an online gallery of the works at the Philadelphia Sketch Club website.  You can find out more about our Bucks County Illustrators Society at the BCIS website as well.

The art on this postcard is by Becca Haushalter Klein, an up-and-coming illustrator in our area, a huge Disney fan (perhaps you could tell) with a Belle (of Beauty and the Beast) personality.

The illustrators of BCIS have had the good fortune to be invited to create a Member Show, to be hung in the large gallery of the Cultural Center at the Pearl S. Buck estate in Perkasie, PA.  Becca’s illustrations just explode with mood and magic, and we were very glad she gave the ok for us to use her illustration for our card.

There will be a variety of other lively and imaginative illustrators exhibiting in the show, including

If you are in the area of beautiful Bucks County, PA, from June 26 to 28, you should take a look at our show – especially Friday the 28th, when we’ll have an open wine and cheese reception from 7-9 pm.  More info at theBCIS website at