My friend Roberta Fortune commissions me to do a caricature of her for practically every holiday that comes along, and she uses these illustrations to brand her events as The Spa Lady, wherein she helps clients relax their lives with essential oils, wellness products and yoga. I drew a black/white caricature of her recently and thought I’d post that and some of the previous holiday caricatures, which all show off her clever marketing and effusive and fun personality.

My recent drawing, showing her with some fragrant burning sage –

and some of the previous holiday-themed drawings (click to enlarge):

I was contacted by Jim Hardy, who owns James A. Hardy Professional Services, to help rebrand the promotional materials for his Advanced Carpet Cleaning service.  When I met with Jim I told him, as a consumer, I like it when companies include the owner’s name in the company title – it might be an old-fashioned thing, but to me it connotes pride in ownership and a value for reputation, because no one wants their name associated with a company that does less than its best. When Jim told me his story of building his company on word-of-mouth recommendations and jobs well done, I could tell that it’s his philosophy too.

Jim had seen a caricature I’d drawn years ago for a mutual friend, Dave Taurino, of Taurino’s Painting. Jim wanted a similar representation of himself in his new logo, using his commercial carpet cleaning equipment, because he wanted the image to be instantly recognizable as relating to carpet cleaning. He also wanted the image to be bright and colorful so it would look great on a new commercial truck he is planning to acquire.

I started by drawing a caricature of Jim (not a very exaggerated form of caricature, just a general likeness) and putting a colorful graphic shape behind him.  Jim sent me photos of the type of cleaning equipment to include, and he noted that he wanted to add “and the Carpet Guys” to the title of the company.

After some tweaks and with Jim’s input, we developed his business card – below is the initial version on the left and the final version on the right. I’ll write more about Jim’s other branded promotional pieces soon.

My client Roberta Fortune gets a lot of mileage out of her brand as “The Spa Lady.” Ro brings a virtual spa right to your home or organization, and she demonstrates bath, body and skin treatments that leave you and your guests feeling relaxed, rejuvenated and pampered after just an hour. I first drew “The Spa Lady” a few years ago when Ro was building her image, and she used this character – based on Ro herself – as her social media avatar, in marketing campaigns and for holiday greetings to customers. She contacted 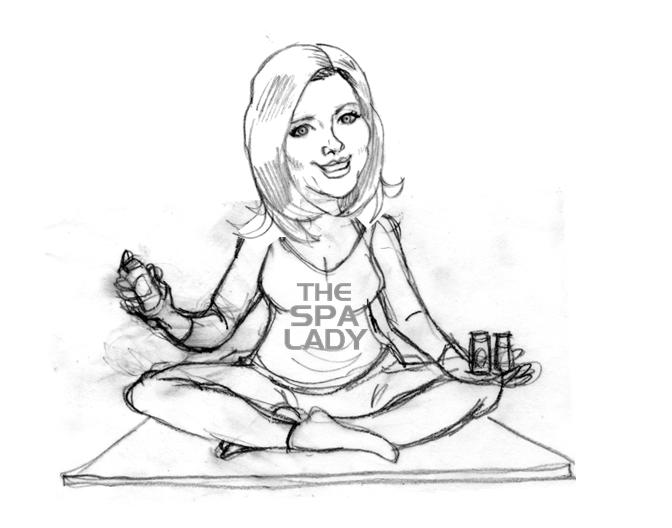 me recently to re-establish the character, depicting her sitting on a yoga mat, holding some bottles of the products.

The facial likeness was a bit off in this sketch, so I checked my photos of her and I think in the color finish I captured her much better. 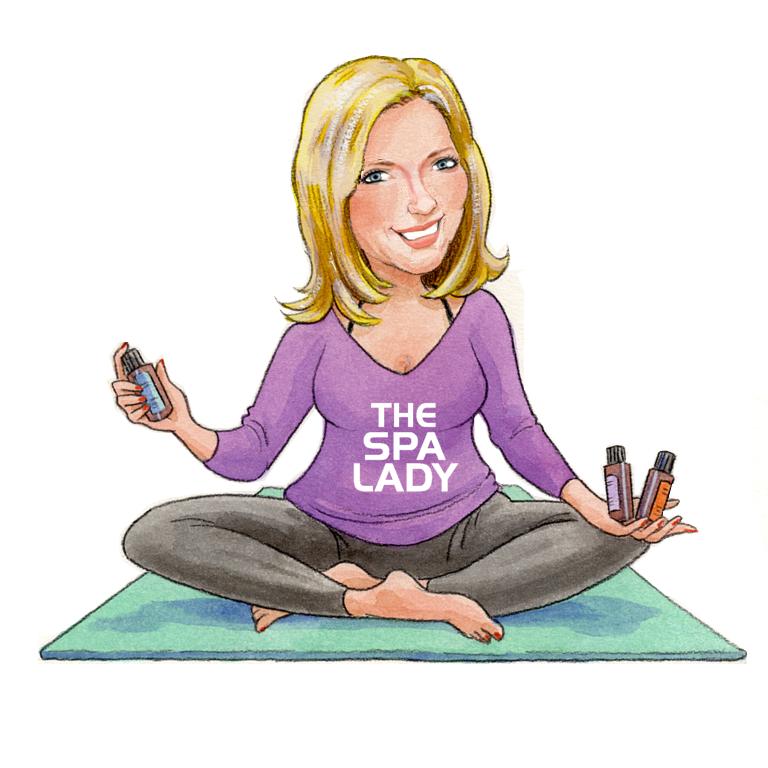 Roberta always has great ideas for using her brand character, and gives me suggestions of props to add for seasonal campaigns.   First up will be a holiday greeting which will also remind clients of the services she offers, which are in demand as a bit of holiday relaxation for companies and non-profits. I always enjoy seeing The Spa Lady pop up on Facebook and other social media platforms, along with other  characters I’ve drawn for business clients.

My previous two posts showed my preliminary work for an illustrated holiday greeting card for Safe-Guard Products International in Atlanta. Below is the finished front of the card.

With a company as large as Safe-Guard, it is an important marketing contribution for their affiliates and clients to get to know and match a face to the directors they email or speak with on the phone. Safe-Guard feels that a personalized greeting card improves their relationship with colleagues, and that my illustration especially helps this association with the real people who manage their company. 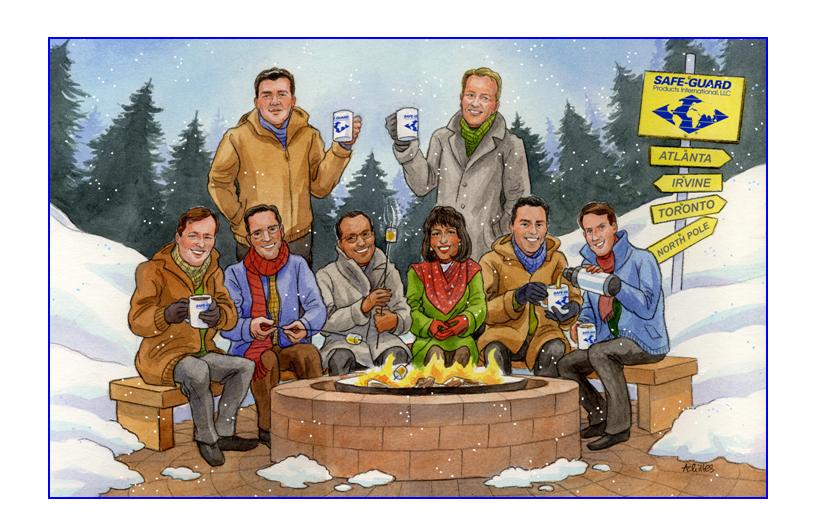 I posted some sketches for this card in my previous post.  Safe-Guard Products International sent me several headshots of all their department directors, which was an invaluable help in depicting people I’ve never met. Because they requested the art be finished asap, I painted this over the weekend pretty quickly, but I didn’t take time to photograph the steps in its completion.  I did make a very rough color sketch first, just blocking it in with colored pencil over a scan of the pencil sketch –

I transferred the sketch to illustration board, drew it with prisma pencils and painted with acrylic paints, watered down and used like watercolor. Here are a few close-ups, I’ll show the complete finish in the next post.

My son has been performing improv comedy since middle school, and he recently teamed up with another talented friend to form a 2-man improv group called Clown Boy.

I am always amazed when my husband and I attend these improv shows, how these actors can take a spontaneous phrase suggested by the audience and build an entire short play from it, with plenty of laughs.  My son Tom has explained some of the ideas they use in rehearsal to set up scenes, find cues as to where the action is heading, and heighten the humorous situations that develop – but I still think I could never do it off the top of my head like they do! 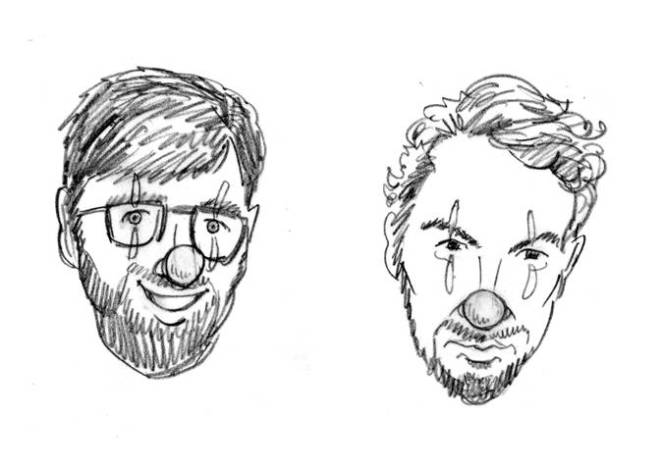 The guys needed a logo for when they appear at local venues in NYC and comedy festivals, so we worked together on a concept. They suggested a design a bit like the traditional comedy/tragedy masks, but using their faces with some clown facepaint added.  They sent me headshots, and I started with a pencil sketch of each of them.

I made a scan of the sketch and colored it in roughly with colored pencil, picked a few typefaces for them to choose, and sent them the mockup below.

They requested a few changes – a different typeface and some variations on the clown facepaint. For the finish I redrew the heads a bit tighter using a Faber Castell felt tip, scanned those drawings onto an MS Publisher page and colorized them with the program, using the typeface they chose.

The final logo is below.  They plan to brand their videos and online presence with it, and I’m looking forward to the next time my husband and I can catch Michael Bird and Tom Achilles in an improv show in NYC! 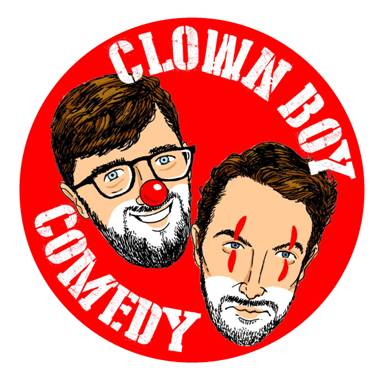 Brendan McMahon, one of the three website/social media experts who comprise Social Fire Media, located outside of Philadelphia, contacted me about creating an illustration for their website, showing the kind of teamwork and interaction that happens whenever they brainstorm for their clients. The illustration’s goal is to help introduce clients to the team and their personalities. Brendan felt that a hand-drawn illustration would stand out in ways that standard headshots fall short.

To begin the job, Brendan sent me several photos of the SFM team and gave me details they wanted depicted in the art: a whiteboard, coffee mugs, a window looking out on the pond that borders their office, and of course a number of devices such as cell phones, tablets and laptops – the tools of their trade.

I started by sketching a layout for the art – not concerned too much at first with likenesses: 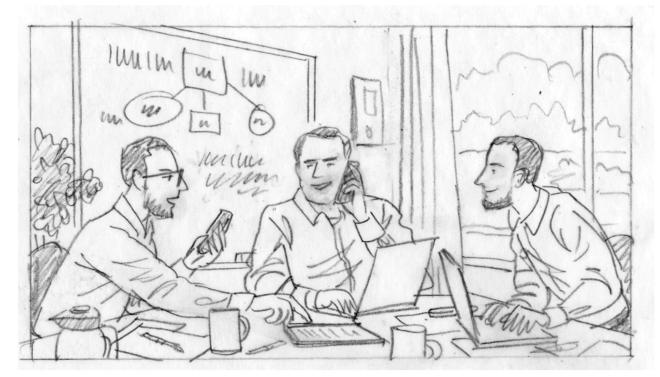 They approved the overall composition, and sent me more photos of themselves as they are posed in the sketch, which helped a great deal in tightening up the pencil drawing:

In the next post I’ll write about the color sketch and finished art.

That’s the only explanation I can come up with after watching the very funny first episode of the new sitcom by one of my favorite comedians, Jim Gaffigan.  The cameos were amazing – people you’d never expect to share screen time, like Jon Stewart and Glenn Beck – and Keith Olbermann? and Nancy Grace? Plus comedians Michael Ian Black and Chris Rock, and quick takes from many comedy club denizens which I’m sure my son (the newly transplanted New Yorker) will be quick to point out to me.

How on earth did Gaffigan get these polar opposites to consent to appear within twenty-two minutes of each other?  Especially within a plot – close to my heart – about what could happen to a well-known comedian if he’s ‘outed as a Christian.’  Do all these disparate personalities just love Jim that much? Or perhaps do they all have more in common regarding freedom and religion than they are comfortable admitting?

As a Catholic myself I see a lot – a lot – of mischaracterizations of religious people by the media.  I’m really pleased Gaffigan can work this topic into his expansive humor, still make you laugh out loud, and still needle those most in need of needling. I can’t wait to see more episodes! The first one can be viewed on his site at http://www.jimgaffigan.com/ . I’d like to hear what you think.

(Quick sketch of Jim Gaffigan above by me, while watching Episode One.)

The people at Lifetime Asset Management LLC, a financial advisory firm, like to have a very personalized card, with their principles caricatured in some holiday scene. Last year’s card is here. I sketched the team giving a financial analysis to a seasonal guest (a favorable analysis, I’m sure.) I started with this pencil sketch:

The team at Lifetime has emailed me several photos of each of the managers in the past, so I can get a good likeness – they are located in another state and so I’ve never met them personally.The team reminded me that they have hired a new employee since last year and wanted her added into the composition.  Since I’ve drawn these clients a number of times already, I was able to move onto the finish quickly, which was lucky because I had other time constraints. The finished art, keeping the color scheme autumnal, below:

That’s their company logo in the picture in the background, something we always try to work in if possible. Lifetime also reaches out to their clients with a birthday greeting card, which I drew earlier this year: 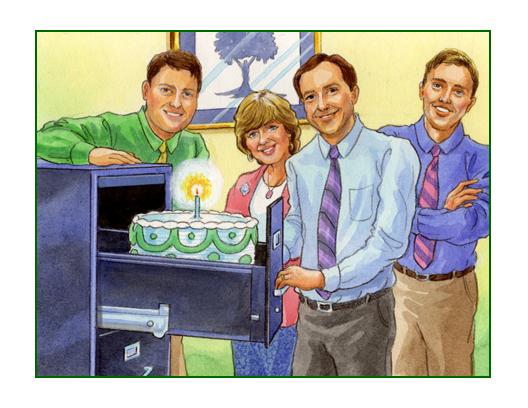 I posted sketches the other day of my friends who own a cleaning company, I think they will use these in an ad and maybe on their website too.