My monthly illustration for an article for Lodging magazine focused on how new electronic currencies, like Bitcoin, may impact the hotel industry.

Because cryptocurrencies, as they are called, exist only virtually, this article presented a challenge to illustrate. The article explained that since cryptocurrencies are fairly new,  they probably would not be used so much by hotel patrons to pay bills as to help in the transactions of hotel financing.

To represent the infusion of electronic funds into a hotel project, I sketched a large Bitcoin resembling a gold coin, with a USB cable leading from it to a hotel; I drew some people about to connect the cable into a port on the side of the hotel building. I also tried a sketch where two people stood on either side of the world, one depositing money into a slot on the globe and the other retrieving the money on the other side, with a series of connecting points inside the globe.

and then transferred the sketch to cold press illustration board, redrew the lines with Prisma pencil and painted it in with acrylic paint washes.. The finished art – 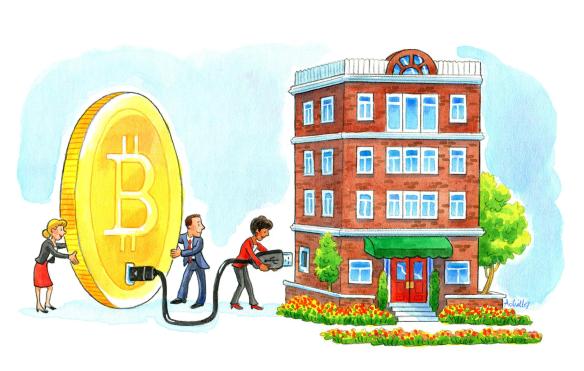 1 thought on “Cryptocurrency Illustration for a Hotel Magazine”