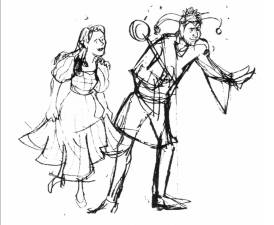 Every June the Bucks County Gilbert & Sullivan Society performs an operetta by their illustrious namesakes, with full theatrical effects – beautiful costuming and staging, rhapsodic music by a full orchestra, and outstanding singers who vocalize the distinctly idiosyncratic lyrics of Mr. Gilbert while giving operatic due to Mr. Sullivan’s soaring arias and choruses. It’s an experience I enjoy wholeheartedly.

While most of the duo’s operettas are predominantly comic, their most poignant and emotional work, The Yeomen of the Guard, has been chosen for this year’s show. You may be sure there is still comedy and patter songs in Yeomen, but the story rests more on the dramatic themes of courage, love and honor, and it does so with great beauty.

So instead of drawing my usual quirky stock characters bounding across oceans and peeking from behind judge’s benches, I painted a more solemn scene for this show which takes place in the time of King Henry VIII.  Solemn – but I hope a bit curious too. The director, Bob Kinney, asked for a scene with some of the main characters – the jester, Jack Point, and his betrothed Elsie Maynard, bowing to one of the sturdy Yeomen who guard the Tower of London and its prisoners. 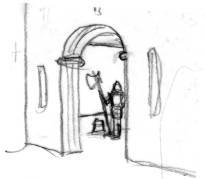 It would be a pleasant moment to illustrate if the sky were not lowering threateningly, and but for a figure lurking by the Tower wall on the right. This figure is the Headsman, ready to dispatch some poor prisoner to his unfortunate fate, and he is a menacing presence in the play.

I tried drawing several compositions to highlight the group of three and hide the Headsman a bit, before I chose to present them as if at center stage. 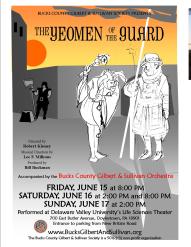 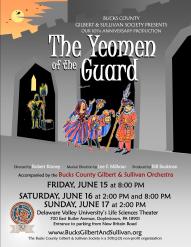 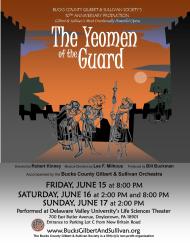 I made the set minimal and neutral in tone, which matches the set for this production, to bring out the colorful costumes and sky and the shadows stretching in front of them give a more serious feel to the scene. I blocked in basic color and tones using the computer. Once I had the composition set I drew the figures in more detail for a sketch to trace to illustration board. 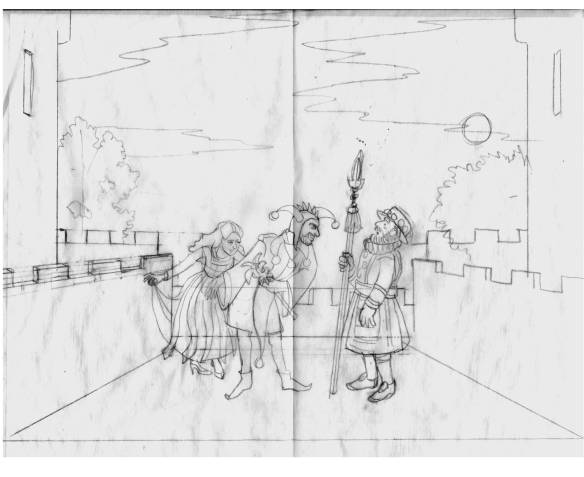 and then painted it using my computer-colored composition as a guide. 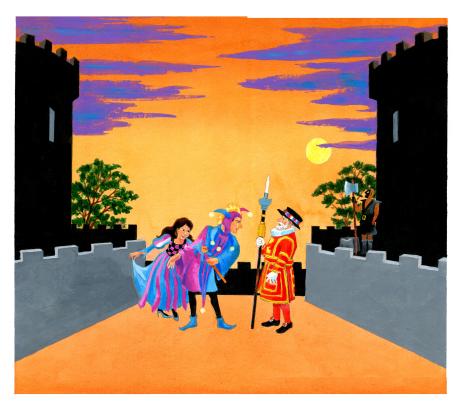 I added in the shadows below them digitally, so i could gradate it to a dark background, so the white type would drop out. 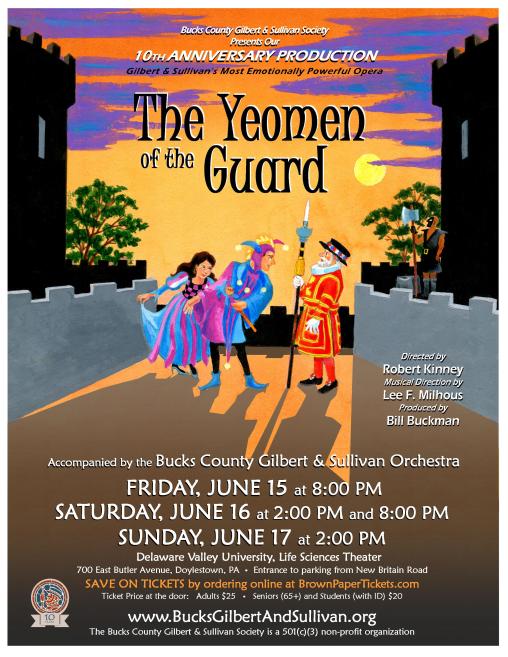 This opera, as is indicated on the poster, runs June 15, 16 and 17 at Delaware Valley University in Doylestown, and it promises to be am extraordinary experience!. Further info is on the Bucks County Gilbert & Sullivan Society website here.