I learned some interesting things about copyrights when I illustrated a New Year’s card recently for one of my clients, Kohlhepp Investment Advisors LLC.

Kohlhepp is a family business and I’ve been drawing the staff for years doing funny things to ring in the New Year – riding a roller coaster economy, holding up a crumbling debt ceiling,  almost falling off a fiscal cliff. This year, with the economy looking up in so many ways, they wanted to play on the upcoming Olympic games and have an upbeat drawing of the family members eagerly piling into a bobsled for a race.

I drew a pencil sketch with the younger members of the staff taking off, with Ed Sr., the patriarch of the family, coaching them from the crowd; then went on to a color-pencil rough color sketch. 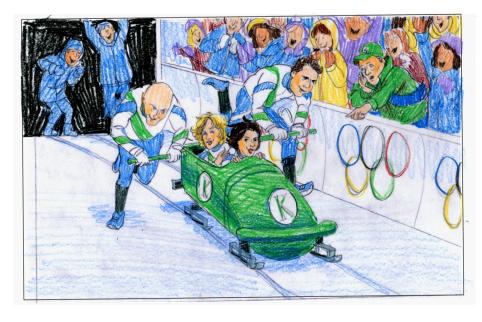 I agreed with the staff that Ed sank too much into the crowd in this composition, so I moved him out of the crowd, coaching them from the left with a stopwatch in his hand.  At this point daughter Mary Beth asked if I was sure it was ok to draw the Olympic rings on the wall – could that be a copyright infringement? I had to check into it, and she was right, the Olympic rings, or anything even looking like the well-known five interlocking rings, is copyrighted by the International Olympic Committee.

We came up with an alternative: how about putting ‘Pyeongchang 2018’ along the wall?  Looked it up – no, that too, as well as Sochi 2014 and Rio 2016, is copyrighted by the IOC. Upon further reading, I learned that the IOC is particularly aggressive in suing entities that appropriate their brand – in fact, they even filed suit against the first Special Olympics for using the word ‘Olympics’, until public backlash forced them to withdraw it. However, I can understand now why the IOC can be so particular – the companies that do become ‘Olympic sponsors’ pay an awful lot of money to be officially affiliated with the brand; and if organizations who are not an official sponsor start using Olympic branding to suggest that they are, that dilutes the value of the sponsorship of the officially designated companies.

We did not want to run afoul of this entity, obviously, so we came up with the idea of putting international flags – which are not copyrighted – along the wall. I drew the final art and I think the result still implies a famous sports event without treading on any legal  infringement.

1 thought on “Bobsledding and Copyrights”