If you don’t know about Rube Goldberg and his hilarious contraptions, you should look him up. There are actually Rube Goldberg contests around the world each year and the videos from it show how much fun his ideas inspired.

I thought of Goldberg when I was sent the latest article for Lodging magazine to illustrate. The article had few visual ideas in it – it detailed many steps that a hotel owner should go through to file insurance claims when a natural disaster forces the temporary closure of the hotel. Not exactly a fun scenario to draw! But the many tips the article gave to go from a hotel closed for repairs to a business up and running again sparked the image in my head of a wonderful but delicately balanced machine.

I started with some ideas based on what I saw in other Rube Goldberg contraptions and drew some rough pencil sketches – funnels, flywheels, ramps, hammers dropping –

and I had to work in a number of the terms used in the article. The real contraptions are often laid out on a long horizontal plane, but I had a limited rectangle to work within, so I found the trickiest part was cramming a number of components into the model and actually making them conceivably work.

I finalized the basic sketch to the components below. I just had to include the ‘Drinking Bird’ on the top far right – that always seems to say ‘Rube Goldberg’ to me  – 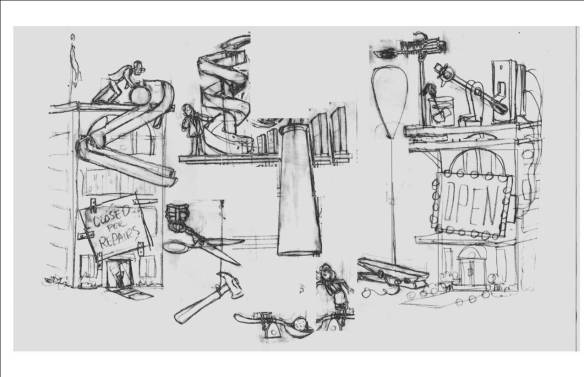 Then I did a value sketch to clarify objects & people, and got the editor”s approval –

and painted it in bright colors, doing all the wording on a separate layer on top of a scan of the art. The sequence of the action starts from the left: the man rolls the billiard ball down the chute; it plops into the red cup which pushes down on the scissors, cutting the string; the string releases the hammer downwards which hits the end of the spoon, shooting the yellow ball up the cone, up into the green tunnel and down the yellow spiral; the ball hits the dominoes, which topple one by one till the last falls down on the clothespin; the clothespin opens, letting go of the balloon string; the balloon rises, hits the paddle which lifts and causes the red billiard ball to roll onto the Drinking Bird’s head, which goes down; his tail snaps up flipping the switch that turns on the Open sign.

1 thought on “Rube Goldberg Illustration for a Magazine Article”