I’ve been working lately on an illustration of a scene from the fairy tale The Pied Piper of Hamelin. I was happily pushed into creating this portfolio piece because of a project initiated by the Bucks County Illustrators Society, of which I’m a founding member. BCiS is producing a portfolio book of members’ work, due out this June, and it looks to be a really interesting, beautifully illustrated publication.  Each member chose an excerpt from a fairy tale-like story and created a full page illustration for the scene.

I’ve always been fascinated the tale of the mysterious Piper who showed up in the medieval town of Hamelin, when the plague, spread by rats, was rampaging through Europe. The legend evidently originated in the town itself, which at one time had a 14th century church containing a stained glass window depicting the story. The Grimm Brothers version of the legend is grim indeed, with the angry Piper, stiffed by the town councillors after he drove the rats from the town, leading the town’s children away to destruction as well. 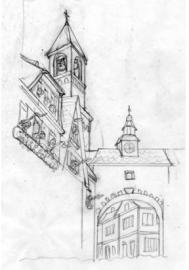 When I rewrite the story I intend to make it a lot funnier and kid-friendly, with one particular rat being the Piper’s comrade-in-arms throughout their adventures.

To see samples of the work of some of the illustrators participating, take a look at the gallery page on the BCiS website. And if you are interested in purchasing a copy of the Bucks County Illustrators Society’s portfolio book when it is printed, please leave me a comment or email me, and I’ll give you ordering info when it’s available.