Twice a year the Lenape Chamber Ensemble performs absolutely delightful concerts for children, in which the world-class musicians of the Ensemble play snippets of masterworks and also explain details about the composer, the music and their individual instruments. While developing the sketch for my latest illustration for their upcoming March concert, I learned that one movement to be performed was based on ‘the Pulcinella

theme.’ I usually try to relate my drawing to one piece in the concert. Probably a lot of the kids and parents who attend don’t get the reference, but I’m sure a few aficionados do.  So I had to look up Pulcinella to see if I could put him into my drawing.

I thought Pulcinella was related somehow to ‘Punch’ of Punch & Judy shows, and I found that indeed is the case – the character of Pulcinella began in Italian commedia dell’arte shows and evolved into the comic puppet character of Punch in the English-speaking world. He’s usually shown dressed in black and white, with a black face mask and a long beak-like nose, a clownish figure.

For my sketch I thought Pulcinella’s look lent itself perfectly to a raccoon, right down to the pointy nose and ‘black mask’ – so that’s who is dancing in the center of my sketch, playing the flute. 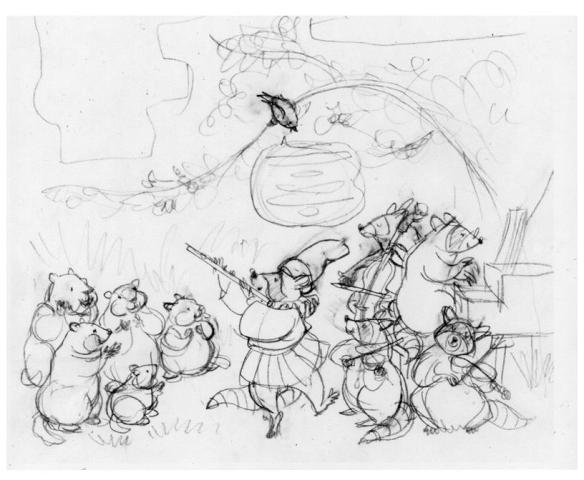 He is entertaining a family of groundhogs because, well, we have both raccoons and groundhogs around my neighborhood.

I then traced this sketch onto good paper and inked in the drawing, adding some details as I went along – see below.  Hopefully a few in the audience will make the connection between the piece and my illustration!  (I highly recommend this concert to folks in my area if they have young children and want them introduced to great classical music in a very fun setting.)

For more of my illustrations, including the cartoons and caricatures I create for corporate greeting cards, scroll down my blog at https://achillesportfolio.wordpress.com/pencilled-in/ .