I’m starting the art for a new poster for the Bucks County GIlbert & Sullivan Society (you can see last year’s, ‘Patience, or Bunthorne’s Bride’ starting here), so I will be posting the stages of the artwork as it progresses.

This year’s Gilbert & Sullivan comic operetta is ‘Princess Ida, or Castle Adamant,’ and concerns a princess who founds a women’s university and teaches that women are superior to men and should rule in their stead – not a far cry from the opinion of some today, nor far from the aspirations of some Victorian women when the show opened in 1884.  Ida’s fiance since childhood, Prince Hilarion, would convince her to quit her bastion and marry him.  He and his friends, Cyril and Florian, scale the battlements and pursue Ida and other charming students they meet.  The three men, in keeping with some unwritten rule of British comedy, dress as women to infiltrate the castle.

My rough sketch for the image shows Ida in her battle gear – for battle is indeed pitched in the show – in front of Castle Adamant. I’ve indicated the three suitors in various poses scrambling over and around walls to catch their maids.  I’ll post more steps to the final art as I complete them. 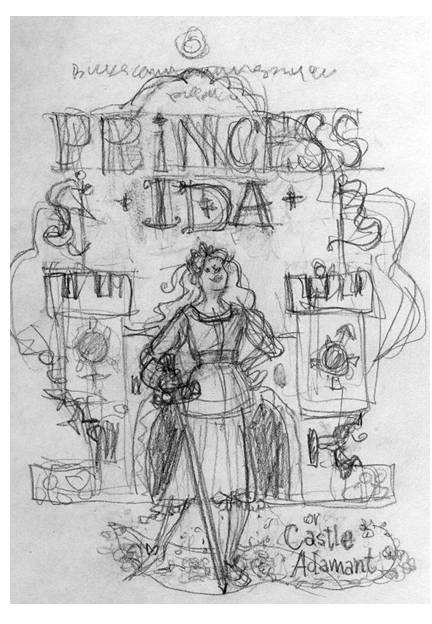 The gents’ poses, scaling the castle: