Wilmington’s beautiful Delaware Art Museum houses a treasure chest of piratical paintings by American master Howard Pyle, most of them published in magazines during the golden age of illustration — around the turn of the century through the early ’20s. I went with other members of the Bucks County Illustrators Society a few weeks ago to enjoy these and other extraordinary Pyle illustrations last Saturday, and learned a good deal about his life and vision.

Pyle lived and painted hundreds of his illustrations in Wilmington, and founded a school of illustration there, attracting such students as N. C. Wyeth, Frank Schoonover, Violet Oakley and Jessie Willcox Smith.  Because magazines were so influential in American visual culture, Pyle’s images and stories—he also wrote some of the historical adventures he illustrated —reached millions and permeate even our current perception of what pirates and knights looked like. 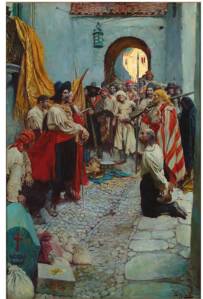 Extorting Tribute from the Citizens, 1905,
Collection of the Delaware Art Museum

Our guide explained that Pyle’s mission was always to insert the viewer into the scene.  He accomplished this through several pictorial elements: composition – positioning elements to lead the viewer’s eye into the heart of the scene and beyond – like the painting on the right; and motion – using strong diagonals to throw the viewer into the action, like the painting below of the haunted ship of the Flying Dutchman; and color – Pyle’s deliberate splashes of scarlet red throughout the clothing and props of his magazine work were used to rivet the viewer to the drama of story.There are many other wonderful examples of Pyle’s work in this permanent collection at the Delaware Art Museum. 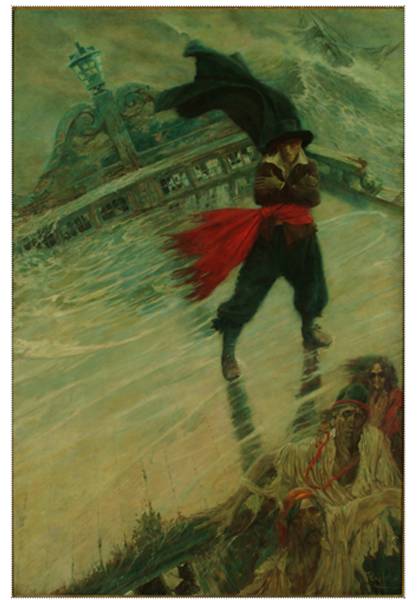 The Flying Dutchman, 1900
Collection of the Delaware Art Museum

Also of particular interest to illustrators,  the museum currently has an exhibit of haunting illustrations by Bulgarian artist Alexi Natchev and a terrific show including work by Bernie Fuchs, Mort Drucker, Milton Glaser, John Cuneo and Peter DeSeve, among others, entitled State of the Art: Illustration 100 Years After Howard Pyle. 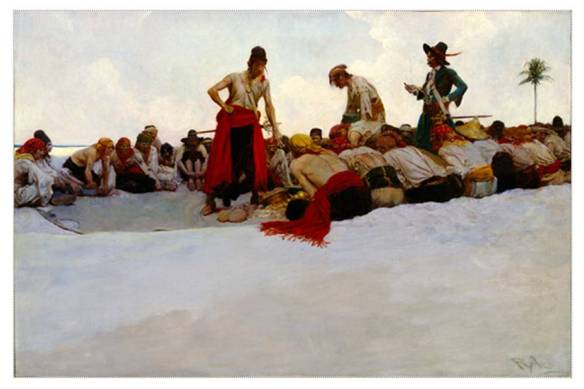 So the Treasure was Divided, 1905
Collection of the Delaware Art Museum